Soldiers are brave,
Our soldiers are selfless
Stepping into harm’s way
In lands far from home.
In a flash, in a heartbeat
Young lives are shortened,
But the hand of the artist ensures

There are moments in time
That are clear in our minds
And hard to define
But determine our lives.
Ask soldiers why they go there
They’d say you’d have to be there.
Even though some comrades die

They’ll be forever young,
In the Portraits of Honour.
Dreams lived and dreams lost,
In their faces and eyes.
The tears of their loved ones
Hurting and healing,
Their heavy hearts broken
But bursting with pride.
There’s no answer when they ask why,

She awakes with a start in the middle of the night
Her mother’s intuition turned on.
He holds her and whispers,
“Everything is alright”,
But she knows that her baby is gone.

The doorbell,
The colonel,
The solemn-faced padre
Confirm their worst nightmare
And the world crashes down.
The school friends,
The bedroom,
The chair at the table
Are empty,
But the memories live on 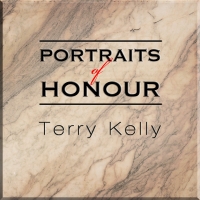 Written to further commemorate the lives of our veterans and acknowledge the stories, pain and pride of their loved ones. The song was performed on November 11th at the National War Memorial in Ottawa as part of the unveiling of a Virtual Wall of Honour designed to recognize those who serve, those who have served, and the ones who have made the ultimate sacrifice for people at home and abroad.

Making “Portraits Of Honour” was one of my most effortless, yet most difficult song writing experiences to date.

I must say, I’ve written songs before that have stirred up my emotions, but this song comes from experiences, thoughts and conversations that have almost ripped my heart out, and, at the same time, inspired me to get quiet and take the time to gratefully count my blessings.

Although the thought certainly stops me cold, I can’t imagine the helpless, numbing, crushing, and earth-shattering sense of denial and disbelief a mother or father feels having a son’s or daughter’s life shortened in a flash, in a heartbeat.

My inspiration to write the song “Portraits Of Honour” began with an invitation to give the keynote address, a presentation of talk and music, to the Kin Canada National Conference in Halifax, Nova Scotia. At that August 27, 2010 conference, Kin Canada launched an ambitious, and, on the part of all Kin Canada men and women, a selfless initiative by these amazing volunteers, to raise much-needed funds for the Canadian Military Family Resource Centers across the nation.
The plan was to travel from coast to coast, with a beautiful and haunting mural, filled with portraits from the hand and brush of artist and painter, Dave Sopha, of every fallen Canadian soldier from the Afghanistan war. It was mounted on a tractor trailer that would stop in the home town and city of each hero. I was given the honour of speaking and singing, in a few of those grieving communities.

The first words of the song came to me one evening at the memorial dinner as I listened to a medic and doctor who had spent many months inside and outside the wire. The remainder of the lyrics seemed to settle around me and on my hands and keyboard like a gentle mist. This was somewhat magical, because most songs for me come with much time, focus, and rewriting, but “Portraits Of Honour” seemed to come to me from the spirits of the young soldiers themselves, with very little effort.

This song acknowledges the bravery, selflessness, and the desire of these conscientious young heroes to help, not only the citizens of their homeland, but to forge a better life, and to plant and cultivate seeds of hope for strangers far from home. It addresses the question asked by many, “Why go there, anyway?” And without going into detail, they’ll answer, “You’d have to be there yourself to understand”.

One of my most poignant and inspiring moments was listening to a mother tell of how her mother’s intuition awakened her in the middle of the night, and how, despite assurances from her husband that everything was alright, she knew that her son was gone. She continued to say how the floor dropped from beneath her feet when the doorbell rang in the morning, and they saw the padre and the officer standing on their front step.

Dave Sopha’s masterful portraits, which can be viewed at www.portraitsofhonour.ca, will ensure that these fallen soldiers will always be remembered, and remain forever young in the Portraits of Honour. They will serve, as have all of our fallen from times past, to inspire all of us to be grateful for their sacrifices and our many freedoms. My hope is that this song will bring some additional colour and reverence to the honour of all the fallen from every service person from any country where freedom is valued and defended.

In closing, I want to acknowledge and thank General Rick Hillier for having me join him and a team of NHL alumni on a mission to Kandahar. Several previous requests to join a team before Hillier hadn’t materialized. General Hillier had no reservations when I made a request as a totally blind person to join the mission. My manager and brother, Tony Kelly, and I were able to function as one unit, with no extra accommodation, or posing no extra liability for the Canadian military beyond any of the other team members. As one might imagine, the song, “Portraits of Honour” was immensely influenced by our time spent on the base at Kandahar.