A Pittance of Time

A Pittance of Time

God forgive me for wanting to strike him
Give me strength so as not to be like him
My heart pounds in my breast, fingers pressed to my lips
My throat wants to bawl out, my tongue barely resists

Read the letters and poems of the heroes at home
They have casualties, battles, and fears of their own
There’s a price to be paid if you go, if you stay
Freedom is fought for and won in numerous ways

In Peace may they rest, lest we forget why they died.
Take a pittance of time 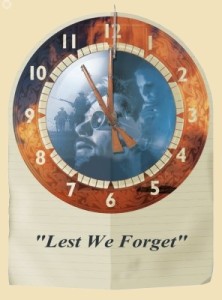 On November 11, 1999 Terry Kelly was in a drug store in Dartmouth, Nova Scotia. At 10:55 AM an announcement came over the store’s PA asking customers who would still be on the premises at 11:00 AM to give two minutes of silence in respect to the veterans who have sacrificed so much for us.

Terry was impressed with the store’s leadership role in adopting the Legion’s “two minutes of silence” initiative. He felt that the store’s contribution of educating the public to the importance of remembering was commendable.
When eleven o’clock arrived on that day, an announcement was again made asking for the “two minutes of silence” to commence. All customers, with the exception of a man who was accompanied by his young child, showed their respect.

Terry’s anger towards the father for trying to engage the store’s clerk in conversation and for setting a bad example for his child was channeled into a beautiful piece of work called, “A Pittance of Time”. Terry later recorded “A Pittance of Time” and included it on his full-length music CD, “The Power of the Dream”.

In the interest of creating a greater awareness of the sacrifices that have been made and are still being made on our behalf, “A Pittance of Time” has been adapted to the French language and titled “C’est si peu de temps”. Music videos for both audio tracks were produced in support of the campaign and a musical/theatrical concert production, “Two Minutes of Silence – A Pittance of Time”, was written for the stage.

“Two Minutes of Silence – A Pittance of Time” combines music and theatre in an emotional production that looks at the folly of war. The inspirational songs and dramatic monologues evoke memories both tinged with sadness and joy that ultimately underscore the need for hope and faith in the goodness of humankind.

A relationship – set in World War One – unfolds as a young Canadian soldier fighting in the trenches attempts to bring some sanity to his horrific situation by corresponding with his new bride back home.

Singer/songwriter Terry Kelly features many of his own compositions such as “In My Father’s House”, “Moment To Moment”, “We Can Do Anything”, “Safe Home”, “A Pittance of Time” (and more) plus a few familiar songs from war times – “Pack Up Your Troubles”, “It’s a Long Way to Tipperary”, “Over There” ….

This is a self-contained production includes three musicians, two actors, and a technical crew.

A Pittance of Time – Musical Drama

A Pittance of Time – Music Video